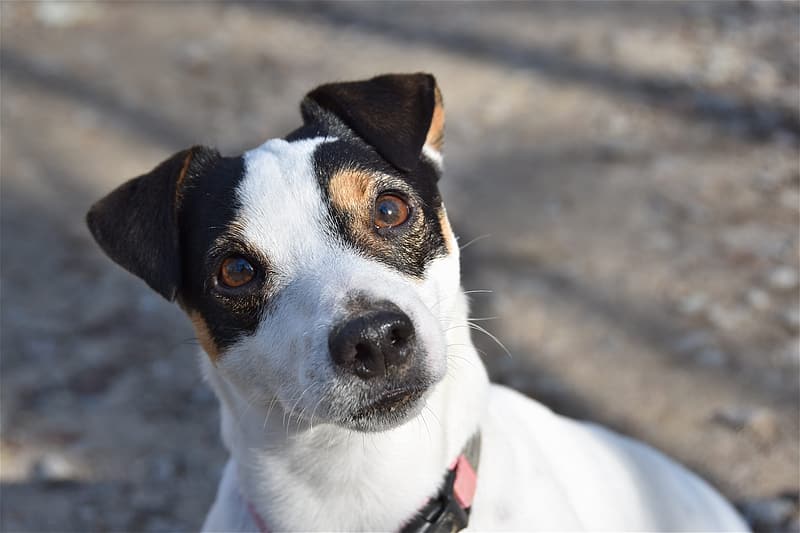 If a feisty, energetic, and fiercely protective dog is what you’re after, then you can never go wrong with a Terrier. These dogs were bred for an active life, and they work as hard as a dog three times their size.

Two of my favorite terriers are the Jack Russell Terrier and the Rat Terrier. They both have hard-working, playful temperaments and they generally have excellent health and long life spans. Put them together, and you get the fabulous Jack-Rat Terrier.

Jack-Rat, or Jersey Terrier: Which is Correct?

You can use either Jack-Rat or Jersey Terrier to describe this hybrid. Most tend to use Jack-Rat because it’s the most self-explanatory, but there’s a nice ring to ‘Jersey Terrier’ – it feels like a whole new breed of dog in its own right, which is no less than this little dog deserves!

The Jack-Rat Terrier isn’t all that popular, even among those who like to mix and match their Terrier breeds. It seems to have gained some popularity in recent years, but the truth is that the Jack-Rat Terrier has been around for a long time.

Jack Russell Terriers were originally bred in England in the late 1700s, specifically raised to be small, lithe animals that could burrow into underground animal dens and drive out pests. They were first used in English countryside fox hunts, whereas today hunters are known to take packs of Beagles instead.

Rat Terriers were bred in the USA and were so called because, unsurprisingly, they hunted rats. Farmers would let their Rat Terriers loose on the land to cull hundreds of the pests in just a few minutes.

Even today, both Jack Russell Terriers and Rat Terriers are still used as working dogs in some areas, but they’ve been largely domesticated. The great thing is that these little dogs are perfect for those of us with limited space, such as a small house or apartment.

So, do you think a Jack-Rat Terrier might be the kind of dog for you? Let’s dive a little deeper into the attributes of this amazing little hybrid, so you can get a real idea of whether it’s the pup for you.

If you’re looking for a slow, lazy dog to pamper all day long, then this isn’t the dog for you! Jack-Rat Terriers have limitless energy and a desire to work and play all day long.

That’s not to say they don’t love a nap or two in the sun, but they see this as little more than a way to recharge their batteries so that they can go whizzing around all over again. Because they’re cute and small, they’re often mistakenly bought by older people who soon learn that they just can’t keep up with the demands of this hyperactive Terrier.

The Jack-Rat Terrier has a very high prey drive, so they’ll chase anything from balls to cats and everything in between. They’re also fiercely independent so put these qualities together and it can be very difficult to get them back on the lead once they’ve bolted off to chase something.

They’re extremely intelligent, though, and they love to please their owners as they learn, so if you take the time to train them, they’ll reward you no end with playful fun and games.

Jack-Rat Terriers are  great family dogs, but they’re known for being better with older people than with children; they really don’t have time and patience for very young kids unless they’ve been well socialized. They love to play with other dogs but again, early socialization is vital.

Neither the Jack Russell nor the Rat Terrier are large dogs, so putting them together results in a small to medium size dog. They tend to inherit the pointed ears and small face of the Rat Terrier, and their puppies are tiny and adorable!

You’ll find that a Jack-Rat Terrier grows to an average height of 14-18 inches, and they weigh around 20-25 pounds. So they’re medium sized and quite light, although if you pick them up you’ll notice they carry plenty of muscle, thanks to their active lifestyle.

Their markings are usually a mix of both parents, so expect a mostly white dog with large patches of black and brown. They tend to have a lot of brown around their eyes and muzzle but occasionally you can find completely white Jack-Rat Terrier puppies.

Because of their small size and burrowing prowess, be sure to Terrier-proof your garden! These little diggers will make short work of any gaps underneath fences and can even leap pretty high, too, so be sure to secure the yard and garden area so they don’t try and escape.

Did I mention that a Jack-Rat Terrier has a lot of energy?!

There’s really no way to describe the amount of vitality and stamina that these dogs have. It means that they love long walks, and they especially love to be able to run and chase a ball, so be prepared for plenty of hours of fetch.

Because of their stubborn streak they must be trained on the leash before you consider letting them off to have a run. If they catch sight of a cat in the distance, they’ll be gone in a flash to chase it, because their prey drive is their dominant quality. It’s what they were bred for!

So, avoid the urge to let them off near roads because they only have eyes for the thing they’re chasing and they’re not too road-savvy. Despite their high intelligence, they are only ever focused on their prey goal.

The Jack-Rat Terrier needs at least an hour of exercise every day. If you’re not sure you’re going to be able to give it that amount of time, then consider another dog because Terriers hate to be locked indoors all day with no way of expending their energy.

Grooming isn’t a big problem for the Jack-Rat Terrier because of their short hair, but in warmer weather you’ll find that they do shed more, so be sure to keep up with their brushing, using a brush that’s especially good for their shorter coats.

Despite their incessant energy, the Jack-Rat Terrier has a real proclivity for weight gain. They should be fed a low-fat, high-protein diet that gives them the muscle mass and fuel for their active temperaments, but that doesn’t let them put on the extra pounds.

Go easy on the treats! Because they need extra rewards during training, find treats that are low in calorie content because otherwise you’ll find that little belly getting rounder and rounder, which isn’t good for their health.

A hybrid dog is always going to be less prone to genetic disorders, when compared to a pedigree. Pedigrees might be the ones everyone feels drawn to, but they’re often very closely in-bred, which means a whole host of genetic diseases and conditions.

Jack-Rat Terriers are generally healthy, active dogs with few health issues. Occasionally they suffer with mild skin issues such as dermatitis. They are, on average, more likely to develop a knee issue called Patellar Luxation, which is when the knee join shifts out of place. This is why it’s especially important to ensure that your Jack-Rat doesn’t put on too much weight.

Two serious but thankfully not too common diseases the Jack-Rat can suffer from are Patent Ductus Arteriosus and Mitral Valve Disease. The first disease is a genetic defect, the second one that comes on with age. Both are treatable but they must be diagnosed as early as possible.

Still On the Fence?

In case you’re still not sure whether a Jack-Rat Terrier’s the dog for you, it’s best to break it down into pros and cons of owning this dog, to help you decide.

In my opinion the pros absolutely outweigh the cons, but as with all dogs, the commitment to take one on is a huge one and should only be tackled with full determination to give the dog everything it needs.

How Much Will a Jack-Rat Terrier Set You Back?

Because they’re not pedigrees, a Jack-Rat Terrier puppy is unlikely to cost anywhere near as much as a pure-bred. That being said, the demand for them has risen in recent years. You can expect to pay between $200 and $400.

You know the rules by now, though… Check the pound! Always adopt before you shop.

A Jack-Rat Terrier is a Great Choice!

You could honestly do a lot worse than the amazing Jack-Rat Terrier! With a firm hand to guide it away from its stubborn tendencies, and a devotion to plenty of exercise and fun, you’ll have years and years of happiness with this incredible little dog, so I say go for it!

3 thoughts on “Everything You Need to know About the Jack-Rat Terrier Mix: Helpful Guide”

Continue Reading
link to The Top Movies with Boston Terriers

What was it that first made you want an adorable Boston Terrier? Did a friend introduce you to them? Perhaps a neighbor brought one home, and you fell in love with it from afar. Maybe you saw...