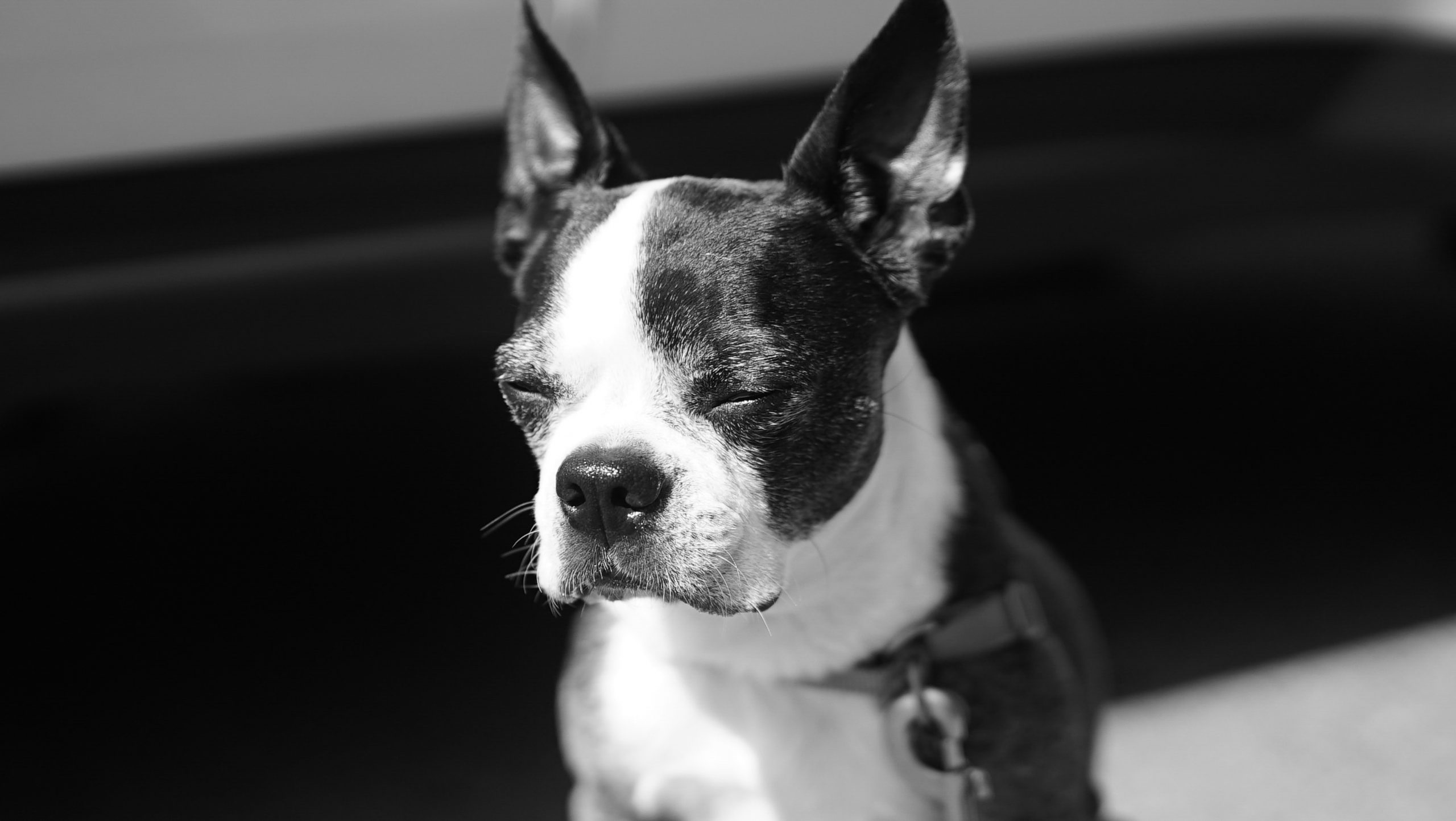 One of the most endearing features of a Boston Terrier is their large, round eyes. It’s what makes the hearts of Boston Terrier fans melt the world over.

And yet, the very thing we love about these dogs is one of the things that causes some owners to choose other pups from the litter instead. While it doesn’t affect every one of the breed, it’s thought to be higher in these dogs than in any other.

Related: Can a Boston Terrier Swim?

We’re talking about strabismus. If you’ve been looking to get a Boston Terrier, or even if you’re already the proud owner of one, you’ll no doubt be aware of this condition. But in case you’re not, or if you’re here to find out a little more, you’ve come to the right place.

The condition known as strabismus is a condition where the eyes don’t point in the right direction. It’s not just a condition found in dogs; it can affect any animal and even humans.

It’s sometimes known as wall eye in dogs, where owners use the term to describe dogs whose eyes do not face the correct way. If you’re a fan of Boston Terriers, no doubt you’ll recognize the condition, where the dog’s eyes point outwards, instead of facing forwards as they should.

Related: Are Boston Terriers Good With Cats and Other Dogs

Strabismus is caused by weakness in the muscles of the eye. We all have many eye muscles, and they work to not only move our eyes so we can look at things, but they keep our eyes in the forward-facing position by default.

For those affected by strabismus, either one or both eyes have weakened eye muscles, so while the eye sockets are in the right place, the eyes don’t sit in their correct position inside the socket.

It’s what gives your Boston Terrier crazy eyes, which might look comical to us, but could be a sign of other underlying problems for your dog.

If you notice he already has the condition when you pick up your puppy from a breeder, then it’s more likely than not his genes that have caused the issue. But if you get a Boston Terrier whose eyes are perfectly normal when you get him as a puppy, and then he develops strabismus, then there could be another cause.

Are There Different Types of Strabismus?

There are in fact two kinds of this condition, depending on which way your Boston Terrier bug eyes turn!

You’re more likely to see an occurrence of strabismus in both of your dog’s eyes, although it can affect one and not the other.

If you’ve got your heart set on a Boston Terrier puppy and you notice that it already has strabismus, then the chances are that it’s inherited and nothing to worry about. Your puppy won’t be in any pain and will never have known any different.

Related: How Much Do Terriers Cost?

To be on the safe side, you can ask for genetic testing on the puppy, where a vet will draw a small amount of blood and perform the test for the genetic abnormality that causes the condition. A competent breeder of Boston Terriers should have no issue with this and will also be able to give you more information on the genetic background of the puppy.

However, given that the eyes are supposed to work in harmony with one another for both humans and animals to be able to see, there are times when your pup may find it difficult to focus on things.

Strabismus might be a reason for you to look for a puppy elsewhere if it turns out that the Boston Terrier you wanted has the condition. Still, it’s not a life-threatening situation for the dog, nor will it affect his quality of life.

Your Boston Terrier may outgrow his genetically inherited strabismus, but it’s unlikely. It means that you should always exercise caution when purchasing from a breeder who tells you that it’s a temporary condition that the puppy will grow out of.

There are some exercises that a vet can recommend if you do go ahead with purchasing a puppy knowing that it has strabismus, but in general, once it’s established that your dog has this condition, there’s very little a vet will recommend that you do. You’ll learn to love your Boston Terrier bug eyes!

What if Your Boston Terrier Develops Strabismus Later?

It could be the case that you take home your puppy without noticing anything untoward with his eyes. But that doesn’t mean that he’s never going to develop the condition.

This is because it’s not just genetics that can cause strabismus. If your Boston Terrier has had this eye problem since birth, then the chances are that it’s inherited and is nothing to worry about. As you’ll know by now, it’s a feature often seen in this breed.

However, if it begins to develop as the dog matures or when he’s a few years old, it can be a sign of something much more sinister. Wall eye in dogs is one of those conditions where it should always be checked out, especially if your dog had forward-facing eyes until more recently.

This is because muscle weakness behind the eyes could have other causes, and some of them will need treatment, especially if they’re the result of something more concerning. There are several reasons for a dog beginning to develop symptoms of strabismus, including:

Problems with the Vestibular System

We all have a vestibular system. It’s the sensory system in our brains that ensures we keep the correct balance, can maintain our posture and allows us to hold our heads up straight rather than having them bang on the table in front of us.

It’s a system that, until it stops working, we’re likely never to give a moment’s thought. But when it develops problems, that’s when we begin to realize its importance. Dogs have the same kind of system, too, and when it goes wrong, things can start to look odd with your pup.

If your dog develops eye issues that look like strabismus, dizziness, or weakened movement, it could be a sign of a vestibular system problem, so be sure to get them checked out by a vet as soon as possible.

Even if you’ve not seen any sign that your dog has taken a knock to the head, it could be something that causes an issue with his eye muscles, resulting in strabismus.

Serious head trauma could also cause excess fluid on the brain, also known as hydrocephalus. This could result in pressure behind the eyes, once again turning one or both into strange positions.

A stroke, or blood clot in the brain, can also be a reason for a dog developing strabismus. It goes without saying that if you notice eye issues or any other strange behavior from your Boston Terrier, then get him checked out immediately.

Neurological problems, infections, or even some cancers could also be underlying causes of strabismus. While it’s more often than not a genetic condition in Boston Terriers, it means that they likely have had it from birth instead of developing it later.

Watch out for strange eye movements, head cocking, and a lack of balance in your pet, which could all be signs of an illness or condition that needs treatment by a vet. Once the issue has been located and treated effectively, then the symptoms of strabismus will also disappear.

As long as the strabismus in your Boston Terrier is genetic as opposed to being caused by illness, then it’s likely he won’t have any issues with his eyes. It’s one of the common features of this breed that, while not ideal, won’t take anything away from your Boston Terrier’s health or vitality.

Whether you choose a pup with strabismus straight from birth, or you decide to adopt one who’s been surrendered because of this condition, there’s no doubt that it will have zero effect on the joy this little pup will bring to your life!