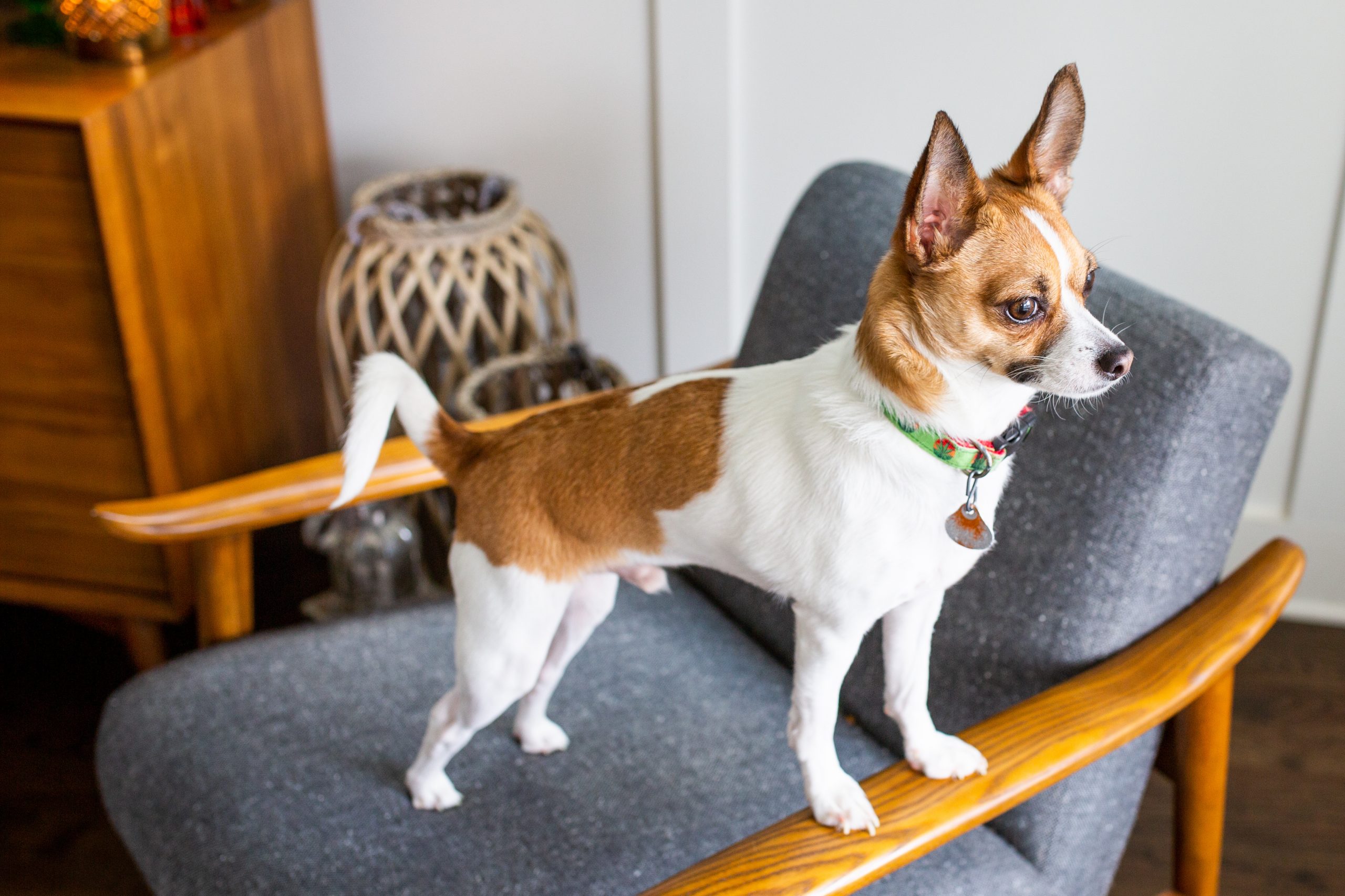 The great thing about owning a mixed breed dog is that you experience the best of both worlds. Two different breeds in one dog mean a whole heap of variety as you can essentially design your ideal pet!

Of course, some of the characteristics of your new puppy may be a lottery as you discover which of its parents it takes after. A Terrier Chihuahua mix puppy is the perfect example – will your pup be feisty like a Chihuahua or industrious like a terrier?

With a Terrier Chihuahua mix, size, color, and temperament could really vary because while there’s a small number of Chihuahua types, there are a whopping 30 different kinds of Terrier.

Chihuahuas are very recognizable for their tiny bodies, small heads, and large, round eyes. They rarely weigh over 6 pounds, and their sharp, fox-like ears are always up and alert.

On the other hand, terriers come in different shapes and sizes, so your Chihuahua Terrier mix size will depend on the Terrier parent. For example, Yorkshire Terrier Chihuahua mixes will always be small because both parents are of a small breed, whereas you can expect a Bull Terrier Chihuahua to be larger and heavier.

Chihuahuas have short, soft coats and some Terriers, such as the Airedale or Wire-haired Fox Terrier, have a rougher coat, which will likely be passed down to their puppies. On the other hand, a Yorkshire Terrier has a soft, glossy coat so the resulting ‘Chorkie’ will be a tiny, soft bundle you could stroke for hours on end!

Colors will also vary, but it’s unlikely that a Chihuahua Terrier mix will retain the pure white coat specific to the Chihuahua breed. There will be patches of white and brown, depending on the Terrier parent’s coat.

When a white Chihuahua is bred with a black Scottish Terrier, the resulting ‘Scotchi’ is almost always completely black, perhaps with the odd patch of white. If you love the white coat of the Chihuahua but want the Terrier mix, then look for a Chihuahua West Highland White Terrier Mix and you won’t be disappointed.

What Kind of Temperament Should You Expect?

It really does depend on the breed of Terrier that’s mixed with the Chihuahua, but it’s safe to say that Terriers are known for their incredible energy levels, work rate, and loyalty. They’re very intelligent, with a high prey drive, but they’re not necessarily good family dogs, as they have a low tolerance for small children.

They hate to be away from their owners and aren’t very independent, so they wouldn’t suit a household where the owner is away a lot or working all day. They’re very social animals, but as for their behavior around other dogs, it really does depend on what mood they’re in.

This is, of course, a generalized review of the kind of temperament a Terrier Chihuahua mix will display, but it depends on so much, including training, socialization, and individual personality.

Because the AKC doesn’t officially recognize mixed breeds as pedigrees, you may find that sourcing a Chihuahua Terrier mix puppy is easier and less expensive than buying a full pedigree breed.

Related: How Much Do Terriers Cost?

Training your Chihuahua Terrier mix puppy is vital! That seemingly innocent little pup is going to have a huge amount of energy that should be channelled in the right way, otherwise it could lead to real headaches later.

Early training and socialization will mean a well-behaved puppy who’s good with everyone they meet, whether that’s humans or other dogs. It’ll mean hours of playtime and confidence but a lower risk of destructive and unwanted doggy behaviors.

The Pros and Cons of a Chihuahua Terrier Mix Puppy

All puppies have their own personality and it’s a mistake to presume any dog’s temperament is pre-disposed. That said, there are still elements of both types of breeds that you should be aware of when looking for this mixed puppy. So, here are some pros and cons of Chihuahua Terrier mix puppies.

Ultimately, you never know what kind of dog you’ll get, but if you know which breed of Terrier makes up one half of the pup’s genetic makeup, you’ll have a good idea about what to expect from your mix dog.

So, here are a few Chihuahua Terrier mix breed examples, and the facets of each that owners are most likely to find ring true.

Here are some other Chihuahua Terrier Mixes that may be a right fit for your home.

The perfect size for an apartment or smaller house, the Jack Chi (even called a Jackawawa in some circles!) is a perfect mix breed for those who want a low-maintenance dog. Their coat is short and easily groomed, and there’s very little in the way of shedding.

While they only need a relatively small space compared with other dogs, this doesn’t necessarily mean they’re less of a handful! Jack Chi dogs need a lot of attention, and their Jack Russell streak will have them running off as soon as they find something to chase.

Early training is essential with these dogs, and if they’re left alone, they quickly become bored and will bark a lot. So, plenty of training, stimulation, exercise, and boundaries.

The great thing about the Rat Terrier is that they already resemble the Chihuahua in many ways, such as their large ears, round eyes and pointed features. It means that when crossed with a Chihuahua, the result is one of the cutest, most alert doggy faces you could possibly imagine.

These dogs are very attentive to their owners and are extremely protective. It means that they don’t trust strangers easily and can get a little nippy around people they don’t know, so once again early training is vital.

Their bodies are very delicate so handle with care, but you couldn’t ask for a more loving dog as they adore snuggling with their owners, particularly among comfy warm blankets!

While you might think you have a tiny scruffy bundle of scrappy playfulness, think twice! This Cairn Terrier Chihuahua mix, known as the Toxirn, is a real handful and can be quite aggressive.

The Toxirn is fiercely protective of its owners and makes a great guard dog, despite its small size. It’s the kind of dog who has a ‘Napoleon Complex’ – by this we mean that it has very little idea of how small it is and will take on anything several times its size.

Once welcomed into your home and trained, the Toxirn will never leave your side. It’s a dog that needs a lot of exercise and stimulation, like all Terriers, and it’s important to socialize this dog from early on, so that it doesn’t become snappy and aggressive with other dogs.

Unsurprisingly, whoever’s in charge of naming new breeds and hybrids came up with Bullhuahua for the name of this cross, and it’s a real mouthful. The dog itself, though, is a cracker!

Bull Terriers make wonderful pets, and they love to be in a family environment, as they play well with even the smallest members of the pack. They don’t shed much at all, and they require less exercise than the more hyperactive members of the Terrier family.

Now, they’re not known for being all that intelligent and it’s been noted that the Bullhuahua can take a while to be house-trained, so be sure to have plenty of patience and enough time to dedicate to this essential part of their training before you consider this mix breed.

The strength of the Bull Terrier side of this dog means that it’s probably the strongest of all the Terrier Chihuahua mix breeds, so it’s a dog that’ll need an owner who can handle it and you should resist the urge to let smaller children walk the dog on a leash without the right supervision.

A Dog of Two Halves!

Whether it’s their small size, large eyes or adorably pointed ears that make the Chihuahua so popular, there’s no doubt that they’re a loved and sought-after pet. By throwing the scrappiness, energy, and protective nature of the Terrier, you’ve got an idea pet.

All dog owning comes with a great deal of responsibility, and the demands of the Chihuahua Terrier mix on your time may be larger than with other breeds. But the rewards, as always, outweigh any challenges and you’ll have a friend for many years!

Continue Reading
link to The Top Movies with Boston Terriers

What was it that first made you want an adorable Boston Terrier? Did a friend introduce you to them? Perhaps a neighbor brought one home, and you fell in love with it from afar. Maybe you saw...