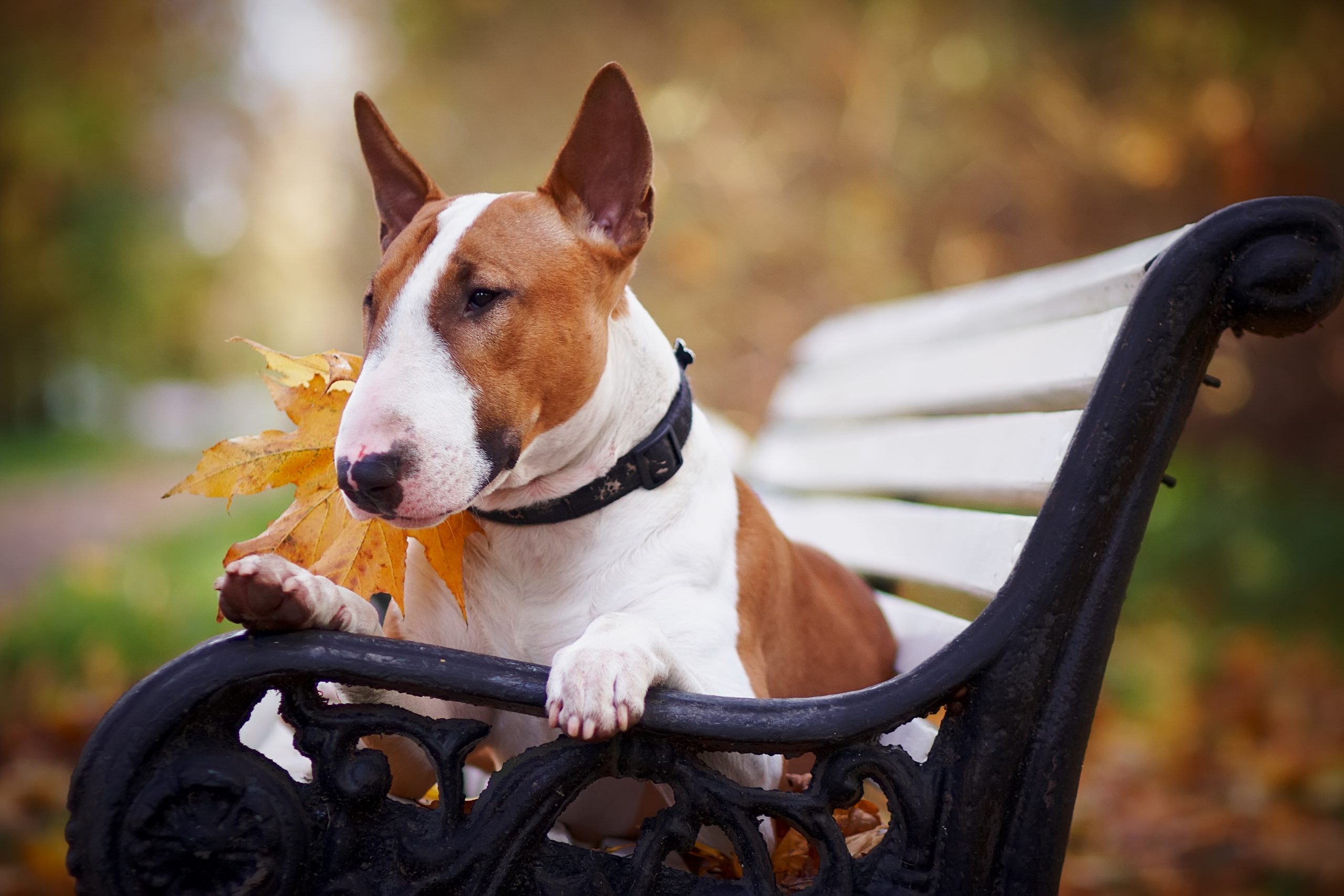 If you’re looking for a fun, energetic dog who will bring years of joy to you and your family, look no further than a Bull Terrier! These dogs are wonderful family pets, as they love to love, are incredibly loyal, and will play for hours.

That’s not to say that you should rush out and get one immediately. There are several very important things that you should consider if you’re seriously thinking about adding a Bull Terrier to the family.

They Need Firm but Fair Training

All dogs should receive training as soon as you get them home, from getting them to learn how to toilet properly, to basic commands such as Sit, which even puppies of only a couple of months old can pick up in a short amount of time.

But a Bull Terrier in your house needs a lot more than a Sit command. It needs to know who the pack leader is, and how to behave properly.

This is because these dogs, while beautiful and loving, can be dangerous in the wrong hands. It’s sad to say that the Bull Terrier was originally bred in England to be a fighting dog. While they’re not aggressive dogs by nature, they are insanely powerful and muscular, and if they bite, they do serious damage.

It means that if you’re going to get a Bull Terrier, you need to show it who’s boss immediately. That doesn’t mean being harsh or beating them but being firm and, above all, consistent. Training a Bull Terrier is a job that never ends, so be sure to get them down to puppy training classes and learn how to be a good trainer yourself.

They Need Someone Who Can Handle Them

And by this, we mean physically.

Their brute strength and stubborn streak mean that they need to be handled by an owner who can compete with their willpower and physical force. It means that unless your Bull Terrier is highly well trained and is an angel on the leash, it should never be up to a child to walk them.

All children, when possible, benefit from having a puppy in their lives at some point. Puppies are companions who grow with your child, and together they create a bond that never breaks. A puppy is a way to encourage responsibility and instil important values into your family.

But a Bull Terrier isn’t the kind of puppy that should be given to a child. No puppy should be the responsibility of anyone too young to adequately look after it, but even teenagers will struggle with the physical demands of a Bull Terrier.

It needs a responsible adult to take the lead and be the pack leader of the home. The rest of the family will, no doubt, thoroughly adore their beloved pet and they’ll surely fight over which bed the dog sleeps on each night, but when it comes to walks and training, it’s absolutely an adult’s job.

There’s a lot a scaremongering and myth surrounding Bull Terriers, with some claiming that they’re dangerous child-killers who just love to bite kids and cause chaos. This couldn’t be further from the truth, but that doesn’t mean that you should disregard their bite power if a bite should happen.

Bull Terriers have a bite force that’s in the top ten of all dog breeds. This should be something you consider if you have young children. These dogs have wonderful temperaments but if they do bite, which is very, very rare, they can inflict life-changing injuries. For some parents, it’s not worth the risk.

It’s never a good idea to get a dog if it’s going to be left alone for most of the day. It’s tough to balance work, school, and other activities but your new Bull Terrier will be another member of the family, and it’s not fair to leave it alone all day.

Bull Terriers just love to be with the family, right in the middle of daily life. They’re naturally inquisitive and always want to know what’s going on. They have plenty of energy and so Bull Terriers should get lots of exercise, and this exercise should be both physical and mental.

Their strong bodies and muscular frame mean that they love a good workout, so be sure to take them for walks that really work as an outlet for their energy. You’ll find that there’s no need for the walks to be miles long, but a brisk walk or even a jog will serve them very well.

Their energy comes in bursts, so once they’ve been for a good walk that tires them out, they’ll flop down and have a nap for a while. Then, once they’re awake, they’ll be fully recharged and ready to go!

High energy levels mean there’s a real need for firm training, so they don’t get too carried away or become too boisterous, but one thing that they love is to play with the children of the family. Bull Terriers are wonderful with children, who they see as siblings that they love to roll around with.

It’s important that adults don’t leave their dogs alone with very young children, and that children understand the need to play properly with their new pet. Play fighting and some rough and tumble are great fun with a Bull Terrier, but an adult should always be there to oversee things and make sure the dog doesn’t get too excited.

It’s vital that they get exercise and mental stimulation in the form of training, play, or even pet puzzles that they have to work out how to operate, in order for them to receive an award, such as a treat.

Bull Terriers are known for being fond of barking, so if they’re left alone for long periods of time you can be sure they’re going to drive your neighbors crazy. Make sure they get enough attention.

Bull Terriers can be very destructive animals if they’re bored or under stimulated. An energetic Bull Terrier, along with those strong jaws and their stubborn streak, can wreak havoc on your furniture, the kids’ stuffed toys, and any food they might have access to.

And, speaking of food…

Most dogs are living, breathing trash cans that inhale their food and will always be on the hunt for more, snuffling out week-old pieces of toast under the couch or trying to reach half-eaten cereal once the kids have left for school.

Bull Terriers are no different, but it’s important to know that they shouldn’t be given too many treats. They should be fed a complete dog food, twice a day, but treats can make them put on weight quickly, and this is really bad for their joints.

So, make sure you let the kids know that while the odd treat is fine, they shouldn’t be giving their Bull Terrier scraps from plates or feeding them the odd cookie when Mom’s not looking. They put on weight quickly and if they don’t get the right amount of exercise, they can soon turn into tubby little barrels.

They’re Not Great with Other Animals

Bull Terriers are pretty strange to look at and for some reason it means that a lot of people think they look frightening. They’re not scary dogs at all, and any dog that’s looked after and socialized properly is a joy for the family.

But Bull Terriers, while great with the family, aren’t all that good with other animals, particularly other dogs. If they’re introduced early on to other pets in the family, they should be fine, but be careful if you’re at the park. Keep your Bull Terrier on the leash when around other dogs, unless you’re certain that they’re friendly and happy to play.

Because Bull Terriers are often more strong-willed and therefore harder work than some people are prepared for, it’s why they’re sadly often abandoned at dogs’ homes and rescue centers. They’re also known as ‘status’ dogs, which means that certain owners like to be seen with them for a while, but they soon lose interest in the responsibility that owning a dog brings.

While this is a sad situation, it does mean that if you’re looking at getting yourself a Bull Terrier, there’s no need to pay hundreds of dollars for one. There are plenty of beautiful, loving Bull Terriers desperate to be put with a family so they can finally have their forever home.

So, if you’re thinking about getting yourself a Bull Terrier, check local rescue centers first. The staff there will be able to advise on things like the dog’s temperament, and whether they’ve been socialized well enough in the past to be recommended to homes with young children, and so on.

As long as you read up on the breed and are confident that this is the right dog for your family, then you may have made a brilliant choice by opting for a Bull Terrier. They’ll settle in immediately and will waste no time in firmly establishing themselves in the hearts of the whole family.