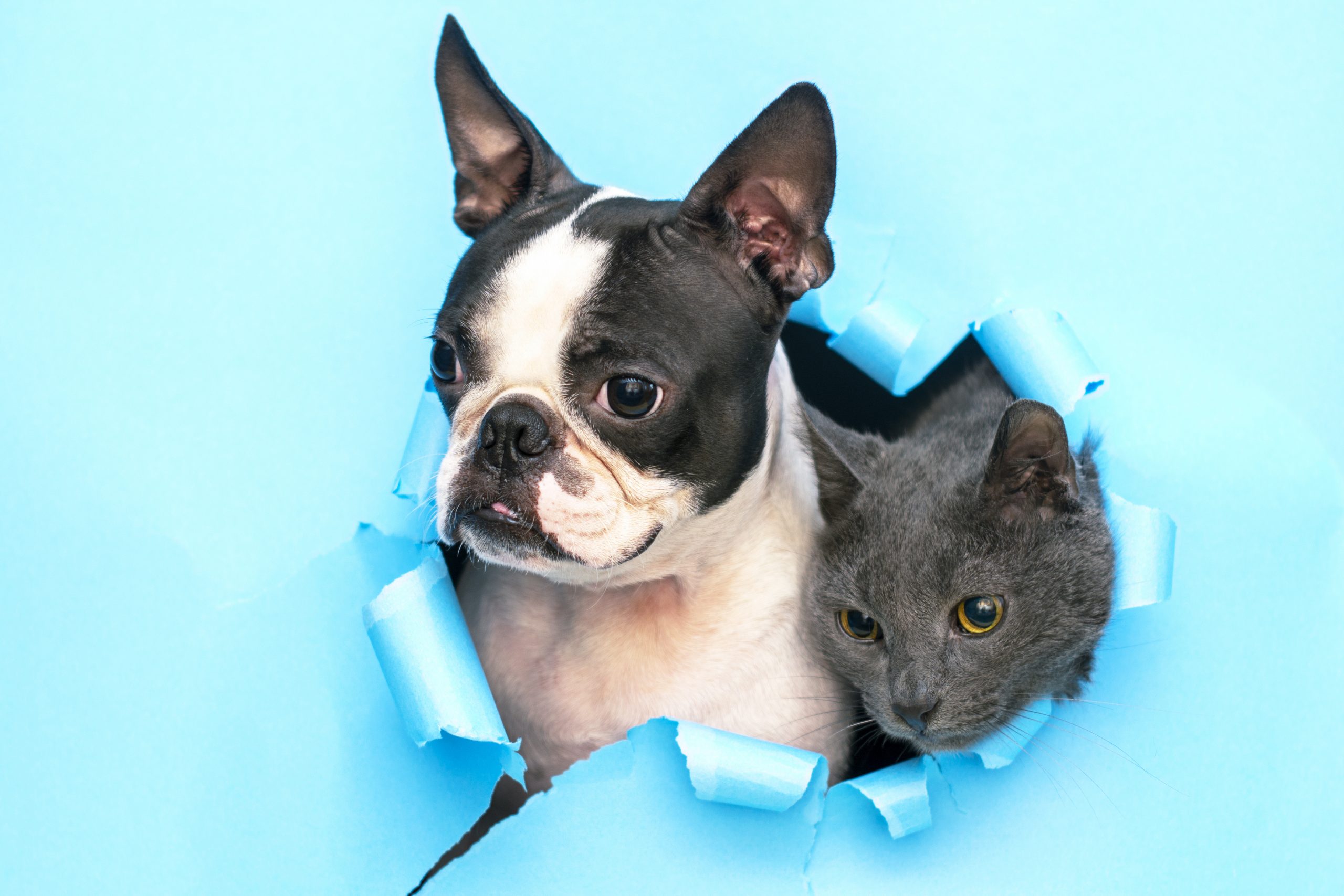 Yes, Boston Terriers are loving dogs who will get along with cats and other dogs. Boston Terriers even have the nickname “The American Gentleman” because of their impeccable manners and great temperament around others.

Their personality differs from that of other terriers in that they love children, cats, and other dogs.

10 Dog Breeds That Get Along With Cats

Below are several other dog breeds that are known to get along with cats.

How Do I Make the Introduction of my Boston Terrier to a Cat?

As a dog owner, any time my dogs has encountered a cat, it definitely hasn’t been a formal introduction.

My dogs were in the same place as a cat just happened to be, and they sure let me know it. They still don’t seem to know what a cat is, so they decided to bark at them and chase them whenever they see them if they’re not under strict supervision from me.

To prevent any tension or chaos from happening, there are several things you can do to make sure your pets have an easier time coexisting.

Step one. Start Nice and Slow (and Calm!)

The first step would be using your judgment to ensure that your pup doesn’t have the hyper temperament of trying to chase, play and scare the cat, causing chaos and a potential fight.

If your pup is pretty calm, with a laid-back temperament, OR has had a rigorous workout and is tired, the first interaction will be the most ideal for you to try to introduce the two.

The tired pup won’t mind being carried around in the cat’s presence and then vice versa to start the initiation process. The animals would be in each other’s eyesight but not directly available to interact, which would help intrigue their interest and show the reaction they’d have in safe conditions.

If you feel good about going ahead with allowing them to meet and they haven’t gone after each other at first sight, you can try to allow them down on the floor together to be in the same controlled vicinity interact naturally.

You don’t want to force an interaction. It may be a good idea to keep your pup in one space distracted by food or toys and letting your other pet free to roam the room. This way, when they want to smell out their new potential friend, they can do it on their own terms without any forced contact or pressure.

Create an Even Playing Field. It’s No One’s House Until It’s Everyone’s.

Another good way to connect your dog and cat is to bring the two animals together outside. Bostons aren’t a super territorial breed; however, if they have a spot in the house, they deem theirs or people in the house that they deem theirs, and another animal walks all over it or crosses a line, it could lead to a bad start to their new friendship.

Pups are typically pretty motivated by positive reinforcements such as treats, attention, walks, or new toys.

If your Boston Terrier responds well around the cat, reinforce the good behavior even if it’s just leaving the animal alone to motivate the pup to always react calm and loving to their new friend.

What Should I Be Cautious About When Introducing My Boston Terrier and My Cat?

Age is a huge factor. The younger the pup when they meet, the better. If you have an older pup that hasn’t been around other animals their entire life, you’d need to proceed with more caution.

They could be more defensive or act more territorial in their own environment against a new animal than a pup who is used to sharing their space with other animals. It’d be an easier adjustment.

Temperament is also important. A tired pup or just an overall relaxed, calm pup will more likely accept adding a cat in the vicinity.

Size is also something to be aware of when bringing a dog and cat together. Luckily for a Boston, compared to a cat, the Boston terrier will be around 17 inches. The average cat is 18 inches before considering their tail. The species are evenly sized, and that way, the potential for one animal to hurt the other severely is limited.

You don’t want either animal to be stressed. You want them to feel at home in their own space. If the tension between the animals is high, there may need to be gates installed to keep them in different places in your home.

Ensuring that they each have a space to retreat to if they want to get away from each other before a problem arises should solve the problem. You’ll need to supervise all interactions between your pets.

Training is also a good tool to keeping the peace in the home, such as a “leave it” command when your pup starts terrorizing your other animal.

Give the interactions time and patience.

How are Boston Terriers with Kids?

A Boston is not an aggressive dog whatsoever.

They can be hyper, jump on people, and be very energetic, which, depending on the age of a child, could be scary. It’s common for a Boston Terrier to knock a young child down due to their weight. Boston Terriers are only looking for attention, and teaching them a “down” command will work fine.

Why Boston Terriers are great with kids:

This doesn’t mean the terriers a threat. Some proper training such as basic commands- sit, stay, and come, and supervision can handle all of these issues. Once a child sees that the Boston Terrier wants to play, it will solve the problem and remove fear.

In the end, the only concern with a Boston Terrier and children (this may be the case with cats as well) will be that they can be overly excited and hyper and could knock over a child jumping up and wanting to play.

The Boston, if anything, demonstrates they’re definitely not afraid or intimidated by a kid, which is often the case with small dogs. This makes owning a Boston Terrier exceptional and exciting.

Overall, Boston Terriers are great dogs for children, and I am confident that your child will love having a Boston Terrier around.

Having a pup for the kids would be a good training experience for them- to teach them how to take care of an animal is a great way to teach responsibility. Just be prepared to back them up if something doesn’t get done 🙂

Boston Terriers are super sweet dogs that are going to adjust well to having another dog or cat in the house.

It’s all about the proper time to adjust, the right way to introduce, and the patience given to the acclimation process.

All animals have such different personalities! I wouldn’t be surprised if you brought your new animal home to your Boston, and they sniffed and went along their merry ways and all of the worrying proved unnecessary!

It’s still nice to be prepared for any part of the introduction process! Here’s hoping for years of happiness and building your pack of pet family members! Best of Luck!

Jessica is a writer for The Terrier Guide.