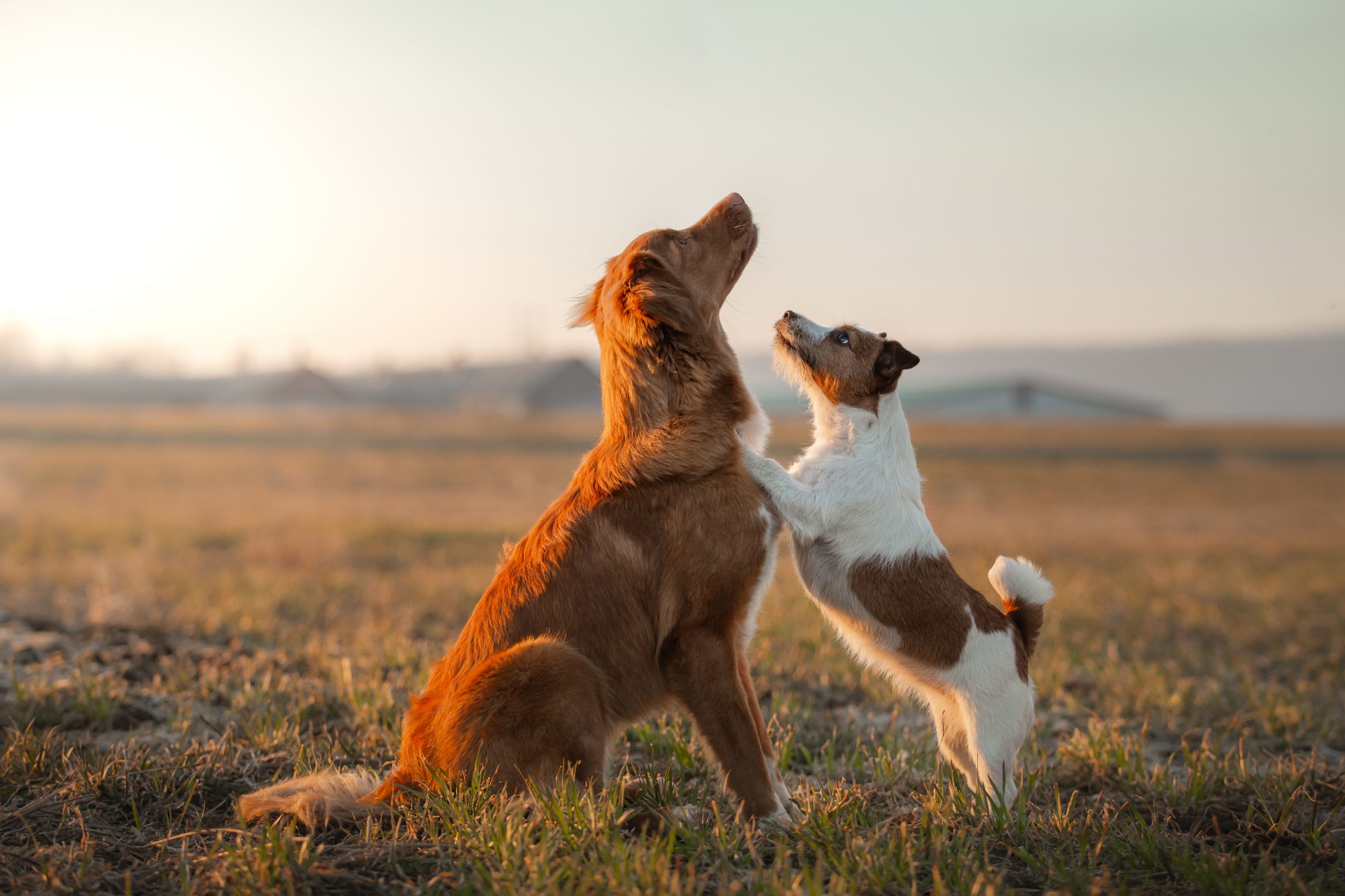 As one of the most common group of dogs, the terriers are beloved by millions of dog owners all over the world. They’re known for being full of energy and character, and they’re so brainy that they’ll have the whole family entertained for hours.

But, of course, these days we want everything! We want the qualities of the terrier but maybe paired with the toy-like appearance of the Chihuahua, or the steadfast loyalty and dedication of the German Shepherd.

Related: What is the Cost of Owning a Terrier

Whatever your choice, it seems there’s a way to make it happen. Breeders have been giving us such mixes as the Labradoodle and the Cockapoo for several years now, so which terrier mix would you have, given the choice?

Here are 15 popular terrier mixes that you just have to see!

Just imagine the gorgeous abundant white hair of a West Highland White Terrier, styled into curls and spiral locks, thanks to the Poodle gene.

These beautiful pups are small to medium-sized, with some litters even being so tiny they’re considered teacup size. This makes them even more adorable, but you should always exercise caution when getting a teacup dog, as they’re prone to a whole heap of health problems.

A blend of two very similar-looking dogs, the Frenchton gives us strong “I want one right now!” vibes. And it’s not just about how beautiful they are, either. This cross between a French Bulldog and a Boston Terrier actually came about as a way to eradicate the gene that causes a condition called Brachycephaly.

Brachycephalic dogs are prone to issues with breathing, so we’re grateful to whoever thought to cross these two breeds because not only are the results ridiculously cute but are much healthier.

Another cutie, and one that’s great with kids, is the Bugg, a mix of Boston Terrier and Pug. With those huge eyes that makes our hearts melt and the scrappy playfulness that means they’re essentially puppies for life, we just love the Bugg.

The only issue is that these dogs do have an issue with Brachycephaly, so bear that in mind as it can mean taking on a puppy with respiratory issues.

A great name for a great dog! This breed, a hybrid Soft Coated Wheaten Terrier and Poodle, also has the name ‘Wheaten-Doodle’ which we also love but have decided that Whoodle is simply too much fun.

Both parents are full of energy and are highly intelligent, so you’re sure to have a fun, lively and bright dog to give you hours of fun. They have beautiful, curly coats in that shade of golden wheat that makes them stunning pups. 11/10 for these gorgeous dogs!

This little guy sounds like the coolest fella on the block with a name like Jack Chi, and there’s plenty of attitude to match the moniker. It doesn’t take a scientist to work out these dogs are a cross between a Jack Russell Terrier and a Chihuahua, and they have amazing temperaments.

They’re small, so perfect for those in apartments or somewhere without a yard, but that doesn’t mean they’re lazy dogs who like to be inside. The Jack Chi has huge energy levels and loves to play, but they also adore cuddles so will be more than happy to snuggle up with you once they’re all worn out.

And, speaking of crossing breeds with a Jack Russell Terrier…

Two of the most iconic dog breeds ever, the Jack Russell Terrier and the Beagle, have come together to make a legendary dog that’s surprisingly calm and placid, despite both parents being known for having crazy amount of energy.

The Jack-a-Bee tends to have the smaller body shape of the Jack Russell as opposed to the long body of a Beagle, but those large, soft brown ears are all Beagle. The coats on a Jack-a-Bee are wiry, like the Jack Russell, and they require very little in the way of grooming.

Always up for a nice long walk and happiest when they’re snuffling away in the undergrowth, these dogs are good for families but they do have a very independent streak, so they’re not always in the mood for cuddles.

It’s not always apparent that the Schnauzer is a terrier, but they are in fact part of this group. And when they’re crossed with (yep, you’ve got it) a Cocker Spaniel, we end up with a perfect blend of adventure and affection.

Cocker Spaniels come in all kinds of colors, so while the Schnauzer tends to be either black or salt-and-pepper colored, you might find that you end up with a golden Schnocker with that quintessential Schnauzer face, matched with that beautifully soft, luxurious Cocker Spaniel coat, as well as those big floppy ears!

Don’t be put off by this dog’s size! These tiny little balls of fluff are home to a surprisingly feisty little dog, which is a cross between a Shih Tzu and a Yorkshire Terrier, or Yorkie.

Shorkies are cute as anything and if you’re lucky enough to own one (they’re notoriously difficult to track down and they’re very expensive to buy) then you’ll be amazed at how dedicated they are to their owners.

But woe betide anyone who comes between them and their human! These dogs are known for nipping at children so are only advised for owners who are willing to give them all the attention, with nobody else getting in the way.

If the Shih Tzu element of the previous breed is putting you off but you still love the Yorkshire Terrier element, consider a Morkie. This time, we’re talking about a cross between a Yorkie and a Maltese terrier, and here you’ll have the most affectionate lapdog you can dream of.

Morkies make great pets for older people who love company, because this little pup just loves to be loved. They don’t need a lot of exercise, and a nice 20-minute stroll a day will do them quite well.

Beware of the zoomies, though! Occasionally they have bursts of energy that will send them speeding around the house but they’ll soon wear themselves out and will be back to sitting on your lap, wanting some love.

Moving away from the smaller-sized dogs to a pup that’s going to give you a little more bang for your buck, we come to the Schnabrador. Once again it’s pretty easy to work out what’s happened here, as these dogs are a mix of a Giant Schnauzer and a Labrador.

Both breeds are highly intelligent but the Schnauzer is notoriously nervous around people they don’t know, so don’t assume that this dog will necessarily inherit the friendliness of the classic family Labrador.

The great thing is that the Schnabrador is easy to train, eager to follow commands and just loves to be taken on long walks, any time of the day or night.

If you’re after a hiking companion, then look no further than this majestic cross between an Airedale Terrier and a German Shepherd. These dogs need plenty of exercise, as much as two hours a day, but you can definitely make it a fun activity.

Whether it’s long walks, exploring parks or playing for hours with a ball, the Airedale Shepherd just loves to explore the world. They’re easy to train and adore water. They do shed a ton, though, so they’re not for the owner with allergies.

Friendly, loyal family dogs who love to meet new people and dogs alike, the Bullboxer is a great pet for those with plenty going on in their lives.

The American Pitbull Terrier has a bad rap but the breed is at its core soft, loyal and lovable. Boxers bring in a dash of fearlessness and energy to make this cross breed amazing fun for the whole family.

The short coat means little grooming and shedding, but training is a must because this cross means a powerful dog to handle.

If you’re looking for a hypoallergenic dog, the Airedoodle is perfect. Airedales are the largest breed in the terrier group, and depending on the size of the Poodle, you could end up with a very large dog, but one that hardly sheds at all.

Both these breeds are highly intelligent, and they love being out and about, but they’re not very good swimmers so be careful about letting them get too close to water.

Some might think it’s a bit of a gamble, putting these two dogs together. After all, they have some of the strongest bite ratios in the dog kingdom, and it can put a lot of people off. But both the German Shepherd and the American Pitt Bull Terrier are sadly misunderstood.

They’re hard working, loyal, intelligent and energetic. They’re the ultimate working dog, so they need plenty of exercise and attention. They’re also large dogs with strong wills, so they need training and a firm hand.

However, they shouldn’t be a mix that’s brought into a household with children. The Shepherd Pitt is known for its aggression at times, and with that level of strength and the combined bite ratio, it could be too much of a risk for parents to take.

Fancy taking on a dog that’ll motivate you to get off the couch? Look no further than the offspring of a Husky and a Jack Russell.

You’ll have a mix of two of the most energetic dogs out there, so don’t even think about taking on one of these unless you have the time and dedication to exercise and stimulation. If you do, though, you’ll be awarded with a playful beauty with eyes to make you melt and the fetching capabilities possibly unrivalled in the dog world.

The only problem with these dogs is that once you get them outdoors, it’s a real struggle convincing them to come inside again!

You Never Know What You’re Going to Get!

It’s always a risk to get hold of a mixed breed dog. You might crave the intelligence of the Jack Russell and the beautiful curly hair of a Cocker Spaniel, and then end up with a wiry Jack Russell coat and the crazy Cocker temperament!

The important thing to remember is that all dogs come with their own personalities, so don’t worry too much about getting the “perfect” dog and simply enjoy your own pet’s wonderful uniqueness.